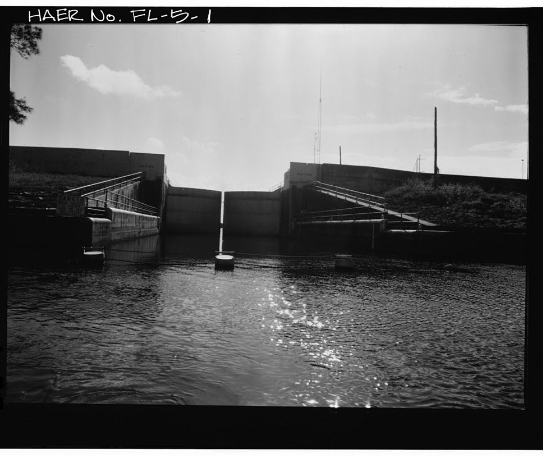 Construction of Hurricane Gate Structure 4 was authorized by the River and Harbor Act of July 3, 1930. As such, it was part of the first major federal project in the central and southern Florida area. The project was developed, in part, in response to the effects of the 1926 and 1928 hurricanes. An estimated 2,500 people were drowned around Lake Okeechobee, and as a result, the hurricanes gained the dubious distinction of being considered great national disasters. Included in the 1930 project were the 8-foot-deep navigational channel from the Intracoastal Waterway near Stuart, Florida (via the St. Lucie River and Canal, Lake Okeechobee, and the Caloosahatchee Canal and River) to Fort Myers. Locks and control works were built near Stuart and at Moore Haven and Ortona. The project also entailed construction of 68 miles of levees along the south shore of Lake Okeechobee and 16 miles along the lake’s north shore, and hurricane gates and 10-foot-diameter gated culvert structures. These facilities were designed to aid navigation, and to protect life and property around Lake Okeechobee. Because this project was authorized and begun during President Herbert Hoover’s administration, the Lake Okeechobee levees were named the “Herbert Hoover Dike” in 1961. Hurricane Gate Structure 4 is an example of early waterworks. Its significance as a historic resource derives from the fact that it represents an early engineering solution to flood control that has continued to function for 50 years.